As I begin this series, it is vital that we talk about vision. Chances are that you have already encountered numerous conversations on this topic since it is the keystone that all leadership rests upon. Without vision, there is no direction, and without direction, there is no leadership. Leadership is simply defined as INFLUENCE, or the recognized authority of one or a few to bring others from one destination to another where the recognition comes from those following the leader. This means that leadership is not given, it is EARNED.

Side Note
Have you ever encountered a situation where an official “boss” is present, yet the true leadership comes from a titled subordinate who knows the power of influence? I know I have. When I first entered the work force, I worked for a company that had a store manager who fell into this category. By title, he was the boss. He made all the calls in terms of salary, work hours, and how the store was run, yet his influence ended at the corner of his shirt, right next to his shiny name badge. As a leader, he was unaware of the effect his negativity was having on employees. He constantly made withdrawals from emotional bank accounts while failing to make deposits. As a result, the store was only cleaned when we knew he would be there, and play took precedence over work. Needless to say, he didn’t remain the boss for long – especially after HQ observed consistent performance failures. What this man failed to realize was that True leadership empowers AND MOTIVATES others to continue moving forward, even in the leader’s absence (As tempted as I am to continue down this bunny trail, I will save it for a future post).

Back On Track
Leadership can have positive and negative influences depending on the convictions of the leader, hence the importance of beginning our journey with a conversation about vision. Before we continue, I want to remind you that this journey will probably look different from your typical discussion on leadership. My goal is not to frame this article around ideas that leaders have written about (although I may refer to them on occasion). The purpose of this journey is to analyze the leadership model that Jesus demonstrated through His life and teachings.

I want you to begin thinking about the habits of Jesus as a child (preparation stage). Where was He constantly found, and what was He doing? If you guessed studying scripture in the synagogues, you are right! 🙂 In fact, we find several occasions where Jesus is reading scripture and learning from those who have come before Him (Luke 2:40-47).

Also, we can see that Jesus prayed constantly as an adult, and it is not too far-fetched to believe that He developed this lifestyle of prayer in his childhood. Studying, praying, and debating are all ways that Jesus began to find a vision for His life. Before He took off from the starting line, He had to know WHERE He was going and HOW He was getting there. This preparation stage lasted for 30 years before his ministry.

I want to take this chance to say, DON’T RUSH THE PROCESS. There is an old saying I read once,

Champions don’t become champions in the ring, they are merely recognized there[i]

A key to leadership not mentioned in this series is that quality leadership is 90% hidden preparation, and 10% recognition. Leaders must take the necessary time to sharpen their “saws” below the surface before they can rise above the surface. Otherwise, like gasoline, they will light quickly and extinguish even quicker.

Why was this time so critical to Jesus? Because during this time Jesus began to understand who He was, and what He was supposed to do. You see, there are TWO visions Jesus had to get.

1. WHO DO I SERVE?
The first vision Jesus had to gain was who He served (in this case, God). He had to spend time getting to know His master’s value system, (dis)likes, and goals. Even Jesus, high-level leader, submitted Himself to someone else. This is such a beautiful picture of leadership. Jesus didn’t do what HE wanted; His goal became only to do what His master had in mind to do. No matter how high up the leadership ladder you are, there is always a greater mission to submit under.

On a more practical level, We should always seek to understand those we serve be it a boss, an organization, or a group of people. Do you know what your master values most (write out their Top 10)? How about the top 5 values of your organization? Is there a conflict between your master’s values and God’s values? If so, how are you reconciling the differences? 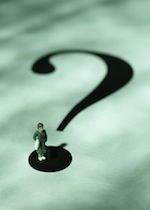 The second vision Jesus had to gain during his preparation time was a clear picture of who He was (AKA Identity). Jesus had to know what His values were and how He would respond to outside pressure. By understanding God’s value system, Jesus began to see how God viewed Him. The reason He was able to take His ministry all the way to the cross was because of the view He had of Himself. Never once did He allow the opinions and ideas of others become His reflection. Instead, as he pressed into the Father’s heart for humanity, He received the Father’s heart for Himself, and that became His reflection (2 Corinthians 3:18).

His identity was later confirmed publicly at His baptism. As we know, Jesus was baptized by John the Baptist before entering into His ministry. Upon submersion, the Holy Spirit descended like a dove, and the audible voice of God affirmed Jesus’ vision of himself to everyone present (Luke 3:22). Isn’t it interesting that the desert season Jesus entered into directly after receiving a public affirmation from God was an attack on His identity?

You see, if Satan can steal your identity – how you view yourself – He steals all motivation and purpose from you. I was recently reading the book, Jesus Culture, and Banning Leibsher made a profound statement:

If your desire is to please man, there will be times you succeed and times you fail. However, if you desire to only please God, you will NEVER FAIL[ii].

As leaders, if our only desire is to appease the convictions of others, we will find it difficult to remain true to our own. There will be times we compromise our values to “make a deal” with someone else. Despite what any of us leaders think, the result is an unstable leader whose decision sways with the opinions of others.

THERE IS ANOTHER WAY
Like Jesus, if we as leaders desire only to do what is pleasing to God (See Inheritance and Spirit of Adoption: The Father Heart of God), we will be free to make decisions that remain true to our convictions. It is upon this rock that we as leaders will flourish. In fact, this is the parallel Jesus was making when He asked Peter, “Who do YOU say I am?” Peter responded with a right answer, “You are the Christ.” Jesus then told Peter that the Holy Spirit has revealed this to him, and on this rock He would build His church (Matthew 16:15-18). That is an odd switch. Why address Peter, then Himself in the same breathe? By spending time with Jesus, Peter understood who He was, and consequently who he would become (The metaphor exists in the name Peter, which means rock and the tie to a revelation of Jesus as the Son of God). The revelation that Jesus is a Son in right-standing with God is the ROCK referred to in this verse. Jesus wasn’t referring to himself, but a revelation of right-standing with God that He was about to make available on the cross (Matthew 16:19). The Church, or the outward expression of properly aligned Kingdom leadership, is built upon a vision of right-standing with God. This means that we as leaders are set free from a pleasing mentality and are fully empowered to make decisions from personal conviction rather than an attempt to please others. As we see ourselves set free from pleasing others, we are free to submit ourselves to God’s vision, which is building and purifying the Bride (Church). Our goal as leaders is a fun job of partnering with God’s vision through our created purpose, be it an artist, business person, pastor, athlete, etc.

So again I ask… What is the point? Why are you doing what you do? As a leader, what purpose(s) are you serving? If you are unclear on this topic, I encourage you to meditate on the following quote and begin seeking God for His plan for your life.

The advantage to leading in darkness is that it motivates you to seek the light[iii].

APPLICATION
This week take time to meditate on and answer the following questions (write them down):

Exercise of the week
For at least three days this week and no less than 5 minutes a day, stand in front of the mirror and sincerely look yourself in the eye (bathroom mirrors are great for this). If you can, begin to speak your name followed by a promise of God as written in scripture. I also encourage you to not just speak flippantly, but to earnestly seek God on what He wants to say to you during this time. If you don’t get anything right away, then start by proclaiming your favorite verse to yourself, and allow the Holy Spirit to speak through that. Say your name often, like you are talking to someone.

For instance, I would look in a mirror and say something like,

Matt, God has HUGE plans to prosper you, and they are good plans. In fact, Matt, all the difficulties you face are designed to make you reflect more of Papa’s character and heart to those around you. (Jer. 29:11)

I have often seen this exercise bring up shame and guilt from the past… allow the process to happen. This exercise has had tremendous results in my life and the lives of several dear friends of mine.

View all posts by Matt Clyde

10 thoughts on “5 Keys of Biblical Leadership, Key One: Vision”